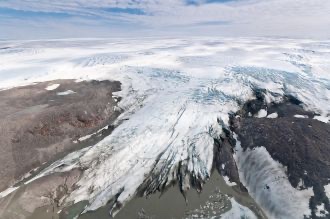 Greenland has lost 3.8 trillion tonnes of ice since 1992 – enough to push global sea levels up by 10.6 millimetres, according to international research. The study shows that sea ice loss is tracking at the Intergovernmental Panel on Climate Change’s high-end climate warming scenario, which would see an additional 50 to 120 millimetres of global sea-level rise by 2100.

Ice loss from the Greenland Ice Sheet has added around 10.6 mm to the global sea level since 1992, reports a paper published online in Nature this week. Although the rate of ice loss slowed between 2013 and 2017, the total amount lost from Greenland is nevertheless close to that predicted by the IPCC for their high-end climate warming scenario.

Ice loss from the Greenland Ice Sheet has been a major contributor to sea-level rise in recent decades, although the extent and speed of this loss has been difficult to quantify. To better understand ice mass changes in Greenland, Andrew Shepherd and colleagues performed a detailed analysis of models and satellite data of the ice sheet’s volume and flow between 1992 and 2018. They find that the ice sheet lost about 3,800 billion tonnes of ice over this period. From 1992 to 2013, the rate of ice loss accelerated, but after 2013 it slowed down, coinciding with a period of cooler ocean and atmospheric temperatures. The authors note that the total amount of ice lost since 1992 is still close to that projected by the IPCC, which predicted a similar rate of sea-level rise due to ice loss.

The authors note that their results differ from previous models of Greenland Ice Sheet mass balance, although the extent of the differences is comparable to the estimated uncertainty. Nonetheless, they suggest that further improvements to the assessment of ice-sheet mass balance are still possible, particularly by further exploration of early satellite records and use of planned satellite missions.