Antibiotic-resistant infections already cause at least 700,000 deaths globally every year.

Although the phenomenon is most concerning for serious infections people are admitted to hospital with, antibiotic resistance means common bacterial infections could one day be impossible to treat.

It’s in these parts of Australia, however, that antibiotic resistance is arguably having the most significant impact.

Antibiotics are medications used to treat bacterial infections. But when bacteria are repeatedly exposed to antibiotics, they can adapt and survive against the antibiotics previously known to kill them.

Using antibiotics unwisely, for example for a viral infection, taking a low dose when a high dose is needed, or stopping a course of antibiotics before an infection has resolved, all contribute to antibiotic resistance.

In northern Australia, the bacteria Staphylococcus aureus, (or S. aureus for short, also known as golden staph) causes skin and soft tissue infections. When S. aureus becomes resistant to the antibiotics commonly used to treat these infections, we call it methicillin resistant S. aureus, or MRSA.

The rates of MRSA in northern Australia are significantly higher than elsewhere in the country. Recent government figures show among people with S. aureus infections, the rate of MRSA in remote and very remote areas was double that of major cities (roughly 40% versus 20%).

Australia doesn’t have a national surveillance system for monitoring rates of MRSA. So the figures can vary depending on the location, time period and the population studied.

Some studies have reported MRSA rates close to 60% in parts of central and northern Australia, compared to about 13% elsewhere in Australia.

What happens when the antibiotics don’t work?

Up to three-quarters of all people in remote Indigenous communities who attend a medical clinic each year present at some stage for treatment of a skin and soft tissue infection such as skin sores, boils or cellulitis.

The prevalence of MRSA in northern Australia means these people can no longer rely on simple, first line antibiotics for treatment.

Treatment failure because of antibiotic resistance means skin and soft tissue infections take longer to get better, and are more likely to spread to other people.

In more serious cases, the infection can invade past the skin and cause a bone, blood or lung infection. If this happens, the patient will likely need to be flown to a hospital thousands of kilometres away.

This issue is compounded when certain antibiotics are unavailable due to shortages. 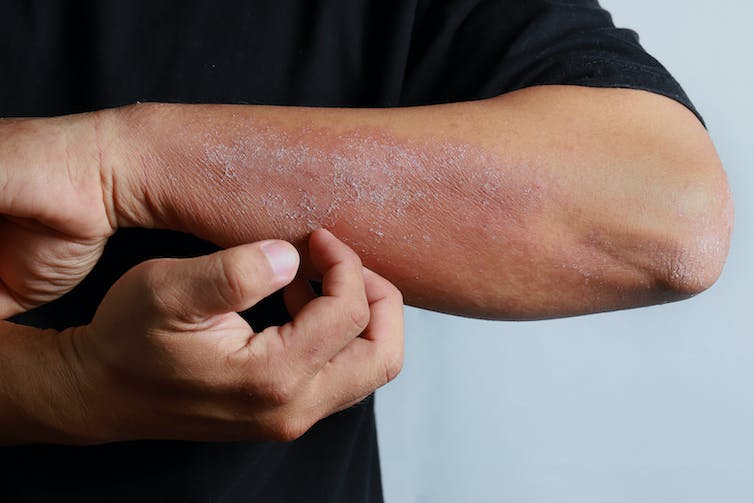 Why is antibiotic resistance so much higher in remote Indigenous communities?

The heavy burden of infections such as skin infections (as many as one in two remote living Aboriginal children suffer from a skin infection at any one time), ear infections, pneumonia, and sexually transmitted infections, mean antibiotics need to be prescribed frequently and broadly. This allows antibiotic resistance to spread.

In addition to high levels of infection, underlying social determinants of health like household crowding and poor access to facilities such as working washing machines and showers facilitate the ongoing transmission of bacteria.

Antibiotic resistance and closing the gap

Health-care workers in remote clinics come from all across Australia and New Zealand, sometimes only for short stints. So it’s important they are educated about local antibiotic resistance rates and local treatment guidelines.

Addressing antibiotic resistance in remote Indigenous communities must be part of the ongoing effort to close the gap in health outcomes between Indigenous and non-Indigenous Australians.

Inclusion of remote Indigenous populations as a priority in the National AMR Strategy is essential. These groups are not mentioned in the current strategy (2015-2019) but we are hopeful they will be included in the new strategy, to be released soon.

Implementing the the National AMR Strategy for remote living Indigenous Australians must be a high priority to ensure antibiotics are available to treat infections among this already vulnerable section of our population.