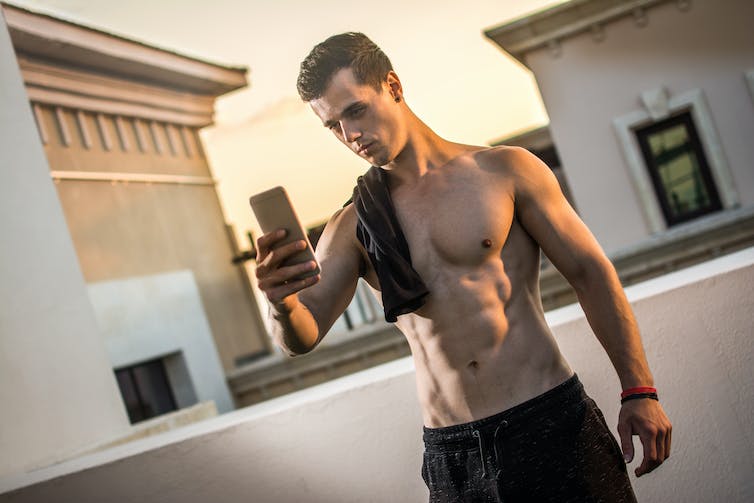 Mair Underwood, The University of Queensland

Months after a public breakup with her husband, the politician Barnaby Joyce, Natalie Joyce made news when she displayed her “new” body in a bodybuilding competition. Joyce’s muscular appearance was described by some news organisations as a “revenge body”.

Two years earlier, after taking “revenge” on ex-husband Lamar Odom with her body transformation, Khloe Kardashian launched a reality TV show, Revenge Body. The show, in which she teams up with celebrity trainers, nutritionists, and stylists to help people build these bodies, began its third season this month.

For the uninitiated, a “revenge body” is an improved body (reduced fat and/or increased muscle) built in order to demonstrate to someone who hurt you how well you are doing without them.

Typically such bodies are built in order to make your ex-lover (who has cheated, or otherwise ruined or ended the relationship) want you back. But you’re too good for them now. You reject them and hurt them through the weapon of your body.

There are over 100,000 posts on Instagram tagged “#revengebody”. Online, people come together to support each other in their quests to build one.

Revenge bodies are about gaining power, particularly the power to attract sexual interest. Perhaps more importantly they are about having the power to reject certain sexual advances, typically those of the ex.

In the past, “revenge body” was a term used only by the tabloid media who imposed it on (largely female) celebrities. For instance, Katie Holmes was dubbed “best revenge body of the year” in 2012 after splitting up with Tom Cruise. More recently, Jennifer Aniston was described as having a “revenge body” after her split with Justin Theroux.

What’s new is the phenomenon of individuals, particularly women, describing themselves as creating a “revenge body” online.

As part of my research into the phenomenon, I am gathering data on social media use of the term. While most people will merely post an image of their body with the hashtag #revengebody, some post comments asking for someone to hurt or reject them so that they can have the motivation to transform their bodies. In online groups, women share diet and exercise tips to help others build what they describe as “revenge bodies”.

I became interested in revenge bodies through my research on the Australian recreational bodybuilder “Zyzz” (online persona of Aziz Shavershian) and his fandom.

Zyzz fans tell the story of an avid computer gamer, frequently rejected by women, who at the age of 17, sold his World of Warcraft profile to buy a gym membership. In just a few years he transformed himself from skinny geek to muscular Adonis.

Many Zyzz fans transform their bodies to take revenge – as their idol is said to have done. They frequently quote Zyzz as saying:

i had a girlfriend at 17, who was pretty but slightly chubby, when i was a skinny nerd. She kept pointing out how skinny i was and always looked at other guys with good bodies which was one of the reasons i wanted to start going to the gym. Needless to say when i saw her 2 years later and her jaw dropped, brushing her off at that moment was probably the best feeling i have experienced in my life.

Indeed, Zyzz’s philosophy to “disregard females” (i.e. play hard to get) and his rejection of women online was a major factor in his popularity. Through online forums and social media Zyzz developed a fanbase of approximately 80,000 people.

But Zyzz didn’t get to enjoy the power afforded by his body for long. In 2011, while holidaying in Thailand, he collapsed and died from a heart attack, aged just 22, reportedly due to an undiagnosed congenital heart defect. Zyzz fans liken him to Narcissus as they suggest it was his love for his own beauty, in particular his steroid and fat burner use, that contributed to his death.

Zyzz’s popularity has only increased since his death. Eight years later his fans (numbering in the hundreds of thousands) still discuss Zyzz every day online. Zyzz rode the first wave of photo and video centered social media, now used by people around the world to display their bodies for revenge purposes.

The rise of the “revenge body” online reflects our relatively new ability to display our bodies through smartphones, social media and high-speed internet. These technological advances have allowed us all to have public bodies – not just celebrities.

Western culture also increasingly emphasises the body as a project that reflects your worth. The condition of one’s body is often seen as a choice: everyone can have an ideal body if they just put in the work.

The rise of the revenge body can also be attributed to the fact that in recent years, we have seen muscularity become part of the feminine ideal. The ideal body for women is no longer just thin, it is thin and toned. This means women can’t just diet to achieve the ideal body, they must also actively shape their bodies through resistance training.

The evolution of the revenge body

Women have had more practice using their bodies as weapons of power. But, as Zyzz attests, a new generation of men are also embracing these bodies.

Recently the term “revenge body” has been used more broadly – in Kardashian’s TV show and some online groups – to describe any bodily transformation, not just those aimed at whoever has hurt you.

But perhaps in a society where body shaming has become rife, and body change is seen as a way of fixing anything and everything, it would be more appropriate to take revenge against the whole culture.

Mair Underwood, Lecturer in Anthropology and Sociology, The University of Queensland