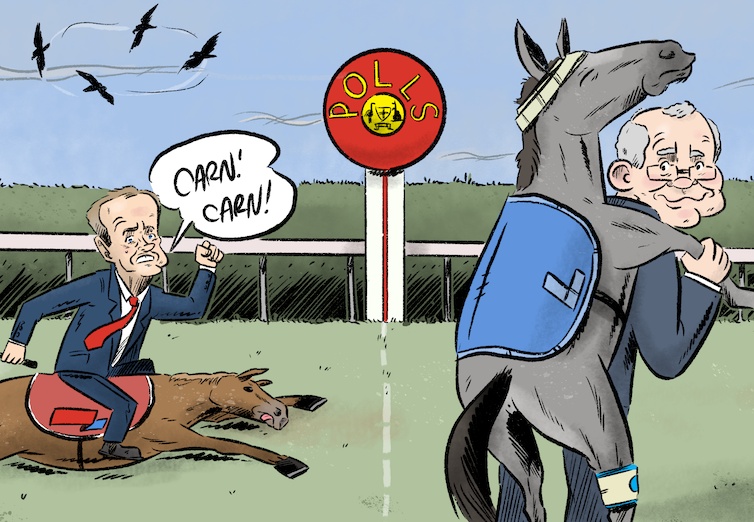 With 75% of votes counted in the election, the ABC is projecting that the Coalition will win 74 of the 151 seats, to 66 for Labor and six crossbenchers. Six seats remain in doubt, so the Coalition is likely to reach the 76 seats required for a majority.

The Coalition gained the northern Tasmanian seats of Bass and Braddon, the Queensland seats of Herbert and Longman, and the NSW seat of Lindsay. The only offsetting gain for Labor was the NSW seat of Gilmore. The Coalition thus gained two seats that Labor won at July 2018 byelections after their members were disqualified by the High Court – Braddon and Longman.

The one piece of cold comfort for the left was that Tony Abbott was crushed in Warringah 59-41 by independent Zali Steggall.

This is a shattering defeat for Bill Shorten and Labor. The lesson will be not to take big policies, such as a strong climate change target or abolition of franking credit cash refunds, to an election where they can be mercilessly attacked by the opposition. The next Labor opposition will pursue a “small target” policy.

Labor’s defeat is also a disaster for meaningful climate change action. As I wrote before, Donald Trump will use the Coalition’s playbook to destroy the Democratic nominee. Voters don’t want real action on climate change if it is perceived to cost the economy.

I think the only way the Western world is going to get rid of right-wing governments is if an economic crash occurs that is blamed on right-wing policies, such as Trump’s trade war or a no-deal Brexit.

How did the polls get it so wrong?

Polls throughout the campaign gave Labor between 51 and 52% of the two party preferred vote. The final Newspoll had a Labor lead of 51.5-48.5, with primary votes of 38% Coalition, 37% Labor, 9% Greens, 5% UAP and 3% One Nation. I believe the poll failure was caused in part by “herding”: polls were artificially too close to each other, afraid to give results that may have seemed like outliers.

While this was a failure for the polls, it was also a failure of the betting markets, which many people believe are more accurate than the polls. These were the Betfair odds just before polls closed in the eastern seaboard states, implying that the Coalition had only an 8% chance of winning.

Similarly confident betting occurred at the UK’s 2016 Brexit referendum, and then at the 2016 US Presidential election. Both Remain and Hillary Clinton lost. It is long past time that the “betting markets know best” wisdom was dumped.

From the time he became PM, Scott Morrison’s approval ratings were roughly neutral, with about as many disapproving as approving of him in Newspoll. With this unexpected victory, Morrison is likely to be hailed as the new John Howard – he won over the conservative voters that Malcolm Turnbull lost, while maintaining support from more centrist voters.

Another reason for the poll failure may be that pollsters had too many educated people in their samples. Australian pollsters ask for age and gender of those they survey, but not for education levels. Perhaps pollsters would have been more accurate had they attempted to stratify by education to match the ABS Census statistics. People with higher levels of education are probably more likely to respond to surveys than those with lower levels.

Compulsory voting in Australia may actually have contributed to this problem. In voluntary voting systems, the more educated people are also more likely to vote. Trump won despite this turnout differential. Brazil also has compulsory voting, and the far-right Jair Bolsonaro was easily elected president in October 2018.

If there is not a large difference between the attitudes of those with a high level of education, and those without, pollsters will be fine. If there is a big difference, as occurred with Trump, Brexit, and now it appears the federal election, pollsters can miss badly. If you sort the seats by two party swing, those seats that swung to Labor tended to be highly educated seats in the cities, while those that swung biggest to the Coalition were regional electorates.

It is clear from the results that Morrison had a much better connection with those with a lower degree of educational attainment than either Malcolm Turnbull or Shorten. To prevail, Labor probably needs a leader with such a connection. Joe Biden, who is currently leading US Democratic presidential primary polls by a large margin, appears to have such a connection.

The Senate is only at 49% counted, well behind the 75% for the House. In SA, NSW and WA, the results are likely to be three Coalition, two Labor and one Green. In Tasmania, it is likely to be two Liberals, two Labor, one Green, and Jacqui Lambie returns after being disqualified. The ACT and NT will both split one Coalition, one Labor.

In Victoria, the Coalition has 2.4 quotas, Labor 2.3, the Greens 0.8, One Nation, Derryn Hinch and Labour DLP 0.2 quotas each. The DLP was placed to Labor’s left on the ballot paper, and Labor lost some votes to them through name confusion. At this stage, the final Victorian seat is in doubt between Labor and the Coalition.

In Queensland, theLNP has 2.55 quotas, Labor 1.64, the Greens 0.81 and One Nation 0.69. Two LNP, one Labor and one Green will win, with the final two seats a race between One Nation’s Malcolm Roberts, Labor and the LNP. Pre-poll and postal votes are likely to drag Labor down, and they will probably be hoping for preferences to overhaul one of the right-wing candidates.

The Coalition made Senate gains in NSW and WA, while Labor gained seats in SA and NSW, but lost one in Tasmania to Lambie. The Greens are likely to successfully defend their six seats. The Coalition will hold at least 33 of the 76 seats in the Senate commencing July 1, with Labor on at least 26 and the Greens nine. There will also be two Centre Alliance, Pauline Hanson, Jacqui Lambie and Cory Bernardi. Three seats are in doubt.

If the right won the three doubtful seats, they would have 38 Senators, and need either Centre Alliance or Lambie to pass legislation opposed by Labor and the Greens. If Labor wins the final Senate seats in Victoria and Queensland, the right will have 36 seats, and need both Centre Alliance and Lambie.

Kerryn Phelps has almost certainly lost Wentworth to the Liberals after seizing it at the October 2018 byelection.