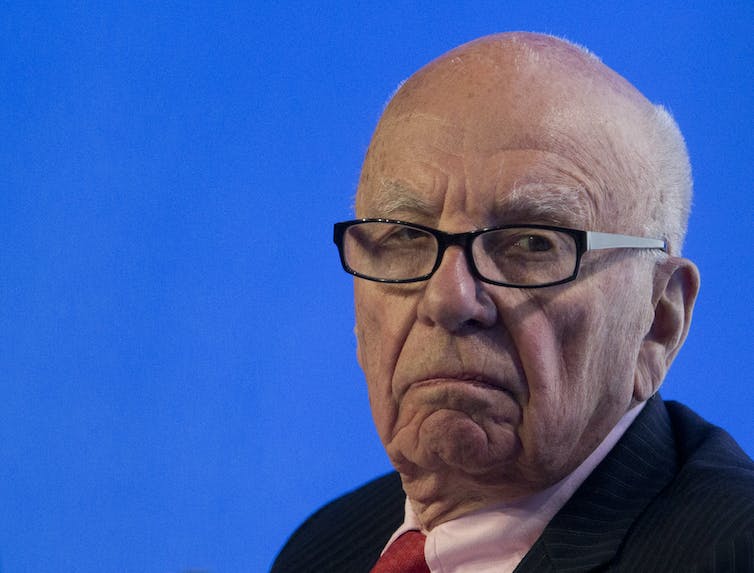 News Corp must have been startled to find itself becoming one of the major issues in this election campaign. But this is just another sign that, in recent years, the company’s ability to read the public mood has gone wildly off-kilter.

From attacking the decision of the jury in the sexual assault trial of Cardinal George Pell to last week’s Daily Telegraph attack on Bill Shorten using his deceased mother as ammunition, there are mounting signs of panic and folly at one of Australia’s largest media companies.

With the media and political landscape shifting rapidly around the company, there is a feeling akin to the last days of the Roman Empire.

Rupert Murdoch is winding back after six decades building up an Australian, and then global, media empire. The Murdoch family has retreated from buying up assets and instead become a seller, offloading, for instance, 21st Century Fox to Disney last year.

Read more:
Mounting evidence the tide is turning on News Corp, and its owner


If the next generation of Murdochs starts looking to sell unprofitable assets, the Australian newspapers have reason to be concerned. Because they are no longer financially valuable to the newly slimmed down company, the Australian papers seem to be trying to prove their worth by being politically useful while they still can.

Since 2013, the News Corp papers have become more politically aggressive, with some adopting the shrill, cartoonish and openly-partisan approach of British “red top” tabloids. During the 2019 election, News Corp journalists – past and present – have spoken out against the company’s determined barracking for the return of the Coalition government.

Chance meeting on a train?

As I explain in my book Paper Emperors: The Rise of Australia’s Newspaper Empires, News Corp began its corporate life in 1922 as News Limited. It was a company that was secretly established by a mining company owned by the most powerful industrialists of the day, and it was created for the express purpose of disseminating “propaganda”.

This was not what I expected to find when I began researching its origins.

The story that News Limited/News Corp has long told was that it was founded by James Edward Davidson, a brilliant journalist and former editor of the Melbourne Herald. After Davidson was pushed out of the Herald in 1918 for asserting his editorial independence, he purchased two provincial newspapers – one in Broken Hill (the Barrier Miner) and one in Port Pirie, South Australia (the Recorder).

According to corporate legend, Davidson was travelling on the Melbourne-Adelaide steam train two years later when he sat next to an old friend, a “miner” named Gerald Mussen. On that journey in 1921, Davidson and Mussen hatched a plan for a new afternoon paper, the Adelaide News, to be owned by a company called News Limited. From those humble beginnings grew one of the world’s most important media companies.

But this corporate tale intrigued me immediately. There was something awry about it.

I knew that Australia’s most powerful industrialist at the time, William Lawrence Baillieu, was one of the directors and owners of the Herald, the outlet Davidson had modernised into a powerful force before his untimely exit. Baillieu was also head of a huge industrial complex dubbed “Collins House”, which dominated the mining and manufacturing industry and was involved in many other businesses. It developed some of Australia’s most famous brands, including the Herald and Weekly Times (HWT), Consolidated Zinc (now Rio Tinto), Carlton and United Breweries (CUB), Dunlop Rubber, and Dulux. 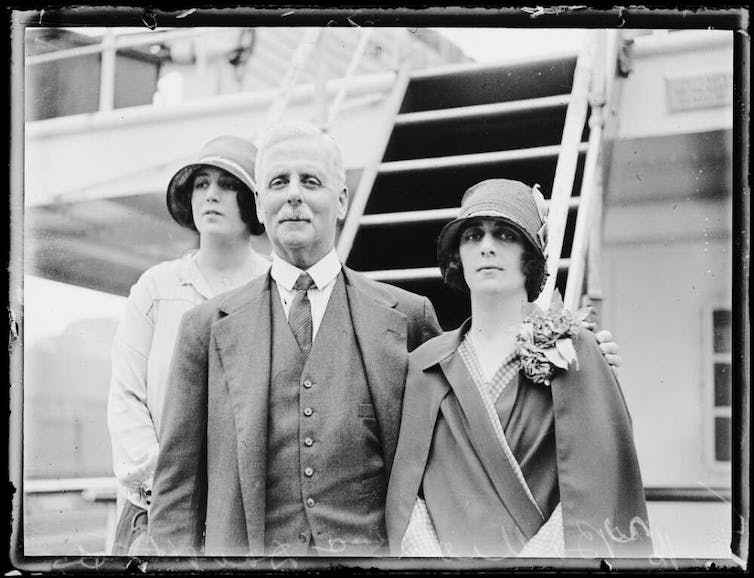 Collins House’s immense wealth and power originally came out of the mines of Broken Hill. It also formed the Broken Hill Associated Smelters (BHAS) in 1915 and took over the lead smelter at Port Pirie, turning it into the world’s largest lead smelting works.

It seemed beyond coincidence that the two papers Davidson had chosen to buy in 1918-19 just happened to be at the two ends of Collins House’s supply chain – Broken Hill and Port Pirie.

Read more:
FactCheck: does Murdoch own 70% of newspapers in Australia?


But I also knew that Mussen, Davidson’s train companion, was no mere miner, as the company story goes. He was Collins House’s industrial consultant. A former journalist, Mussen had become a PR man and fixer, a soother of industrial conflict, who had already worked for Baillieu for more than a decade.

Private letters in the BHAS archive at the University of Melbourne provided the next clues about what – and who – were really behind the founding of News Limited.

A tool for combating union influence

In mid-1918, BHAS executives were increasingly concerned about the union-owned newspaper in Broken Hill, the Barrier Truth. In a letter held in the BHAS archive, the general manager of Collins House’s Broken Hill South mine reported that the Barrier Truth was inciting “class warfare” and industrial unrest. He wanted “some means of keeping it within bounds”. 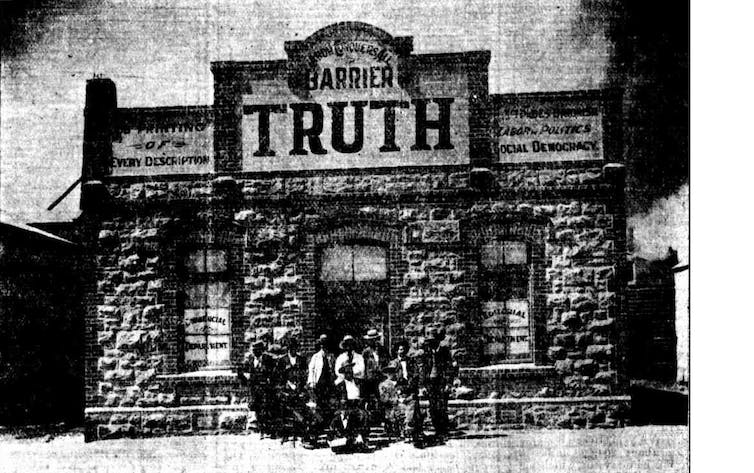 BHAS’ managing director, Colin Fraser, began searching for a way to combat the union paper with pro-mining company publicity. In late-1918, he wrote to Collins House’s WS Robinson and suggested that BHAS buy the Barrier Truth’s local rival, the Barrier Miner newspaper. But the astute Robinson, a former Age journalist, knew it would be a bad look for a mining company to own a newspaper.

Fraser came up with another idea. His letter explaining this idea to Robinson is missing from the BHAS archive. But Robinson’s reply to Fraser is still there, thankfully, for this letter is significant.

Robinson wrote to Fraser in December 1918:

I am glad to note that you are going to shake the Port Pirie Recorder up. There is great room for propaganda in Broken Hill and Port Pirie … Let us try and educate our men, and the public too.

Nineteen days later, a new company was registered in Melbourne for the purpose of taking over the Recorder. Davidson was the key shareholder. Obviously, he was the means of “shaking up” the Recorder and disseminating “propaganda”.

Davidson purchased not only the Port Pirie Recorder, but the Barrier Miner, too.

Under Davidson, the Barrier Miner became known locally as the “bosses’ paper” for its pro-company line. Only a month after Davidson took it over, Fraser wrote to Robinson in March 1919 and said how pleased he was with it. 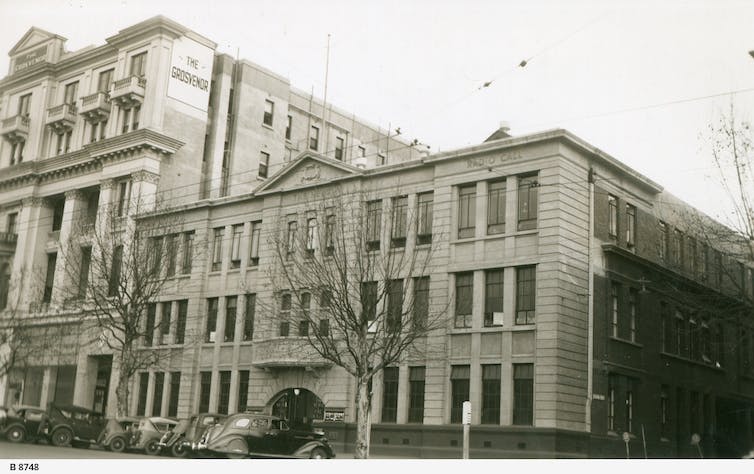 Union activists at Broken Hill suspected the Collins House mining companies had funded Davidson’s purchase of the paper, but they could never prove it.

But proof lies in the letters in the BHAS archives, as well as in the original company documents for News Limited (now held in the State Records of South Australia and the Public Record Office Victoria). When Davidson’s first newspaper company was registered, the only other two shareholders were both Collins House accountants. When it was rolled into News Limited, the company’s first shareholder list was a roll call of key Collins House figures.

Tellingly, Davidson was never made the chairman of News Limited’s board and never increased his shares in the company. By 1929, he was being pushed out of it. A chronic alcoholic, he died while on an overseas trip in 1930, just as Baillieu’s other protégé, Keith Murdoch, was proving a deft hand at interstate takeovers of newspapers.

Read more:
After Rupert – welcome to the game of thrones at News Corp


After Davidson’s death, News Limited quickly ended up in Murdoch’s hands. He initially oversaw the company for Collins House’s HWT but, in 1949, he convinced HWT executives to let him acquire a stake in it.

Murdoch built up that stake to such an extent that, when he died in 1952, he was able to leave News Limited to his son Rupert, who then used it as a springboard for the creation of his media empire.

Veneer of ‘impartiality’ no longer needed

When it was founded in 1923, News Limited concealed its mining company connections at the same time it promised the public that its news would be “independent” and “impartial”.

Lip service or not, notions of balance and the public interest were important then. This was because News Limited’s founders knew that respect was an important precondition for influence, and that newspapers had to be responsive to the communities they served in order to attract a wide audience and prosper.