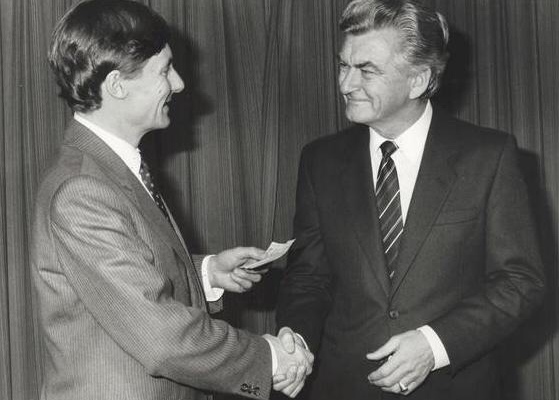 Australians everywhere remember and honour a man who gave so much to the country and people he cared for so deeply.

May he rest in peace.”

Former Prime Minister Paul Keating said in a statement “With Bob Hawke’s passing today, the great partnership I enjoyed with him passes too. A partnership we forged with the Australian people.

But what remains and what will endure from that partnership are the monumental foundations of modem Australia.

In what was our last collaboration, Bob and I were delighted to support Bill Shorten last week in recounting the rationale we employed in opening Australia to the world”

In a statement from Mr Hawke’s wife Blanche D’Alpuget, she said “Today we lost Bob Hawke, a great Australian – many would say the greatest Australian of the postwar era.”

“He died peacefully at home at the age of 89 years …

Bob Hawke and Paul Keating and their govemments modernised the Australian economy, paving the way for an unprecedented period of recession-free economic growth and job creation.

Bob’s consensus-style approach of bringing together the trade union movement and the business community boosted job opportunities while increasing the social wage through Medicare and extra financial support for low-income families.

Together with his highly talented Cabinets, he foresaw the Asian Century and positioned Australia to take full advantage of it through a program of sweeping economic reforms.

Among his proudest achievements were large increases in the proportion of children finishing high school, his role in ending apartheid in South Africa, and his successful international campaign to protect Antarctica from mining.

He abhorred racism and bigotry. His father, the Reverend Clem Hawke, told Bob that if you believed in the Fatherhood of God then you must also believe in the Brotherhood of Man. Bob would add today the Sisterhood of Women.

Bob was dearly loved by his family, and so many friends and colleagues. We will miss him.”

Hawke was born in South Australia but moved to Western Australia as a child. He attended the University of Western Australia and then went on to Oxford University as a Rhodes Scholar. In 1956, Hawke joined the Australian Council of Trade Unions (ACTU) as a research officer. Having risen to become responsible for wage arbitration, he was elected ACTU President in 1969, where he achieved a high public profile. After a decade in that role, Hawke announced his intention to enter politics, and was immediately elected to the House of Representatives as the Labor MP for Wills.