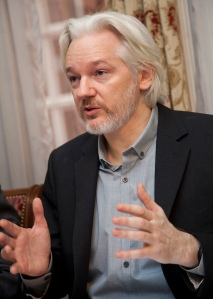 The police have taken Assange into custody at a central London police station where he will remain. Assange will be presented before Westminster Magistrates’ Court as soon as is possible.

The UK police said they had a duty to execute the warrant, on behalf of Westminster Magistrates’ Court, and was invited into the embassy by the Ambassador, following the Ecuadorian government’s withdrawal of asylum.

Assange has been living for the past seven years in the Ecuadorian Embassy, for “failing to surrender to the court” over a warrant issued in 2012.

Russia slams Assange’s Arrest saying it is ‘ the “Hand of Democracy Strangling Freedom“.

Julian Assange has been arrested by officers from the Metropolitan Police Service https://t.co/yhOIPbmMo2 pic.twitter.com/dUrDp228In

Assange founded WikiLeaks in 2006, and came to international attention in 2010, when WikiLeaks published a series of leaks provided by Chelsea Manning.

Following the 2010 leaks, the federal government of the United States launched a criminal investigation into WikiLeaks and asked allied nations for assistance.

Assange hasn’t left the embassy since August 2012 for fear that if he steps off Ecuador’s diplomatic soil he will be arrested and extradited to the U.S. for publishing thousands of classified military and diplomatic cables through WikiLeaks.