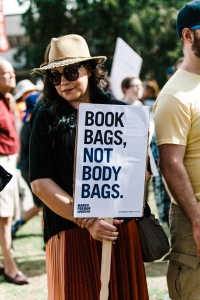 The United States is in a dangerous, self perpetuating violent love affair with guns.

The sad fact is, Gun violence in the United States constitutes a serious public health crisis, causing more than 30 000 deaths annually. That is 30,000 deaths that could have been prevented – 30,000 needless deaths of men, women and children.

Mass shootings contribute to only a small fraction of this mortality and morbidity burden, at less than 1% of US firearm deaths.

Although relatively rare compared with other forms of gun violence, mass shootings are extremely high profile.

This cross-sectional study found through interrupted time-series modeling that 21% of major mass shootings between 1998 and 2016 were significantly associated with increases in gun purchases.

Sharp increases in gun purchases after mass shootings, including shootings in Newtown, Connecticut; San Bernardino, California; Orlando, Florida; and Parkland, Florida, have been documented by the media.