In his first budget speech, Treasurer Josh Frydenberg said education was the

first defence of the nation […] it is critical to our prosperity, harmony and advancement as a country.

Frydenberg said funding for government, independent and Catholic schools was at an “all-time high” when he announced a A$300 billion commitment to schools.

He said the government would set up a $93.7 million scholarship program for over 1,000 students a year to study in a regional university or TAFE.

The government is also dedicating $525 million over five years to fund 80,000 new apprenticeships in areas of skills shortages – including bakers, bricklayers, carpenters and plumbers. The majority of this skills package would be funded from the existing Skilling Australia Fund (which began on July 1, 2018). 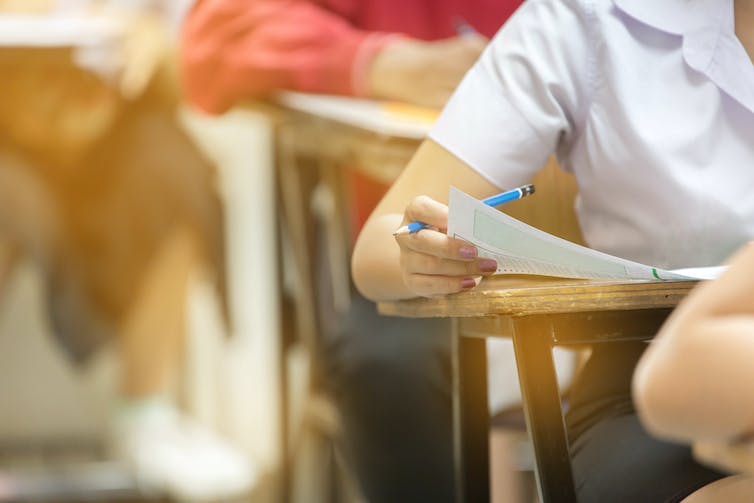 Other education announcements were:

Yes, $300 billion is the biggest ever spend on recurrent school funding (a 63% increase, as Frydenberg said). But with rapidly growing student numbers and the cost of wages going up each year, that doesn’t mean much. And it appears to be exactly what is in the National School Reform Agreement, which was signed between the federal government and all states and territories at the end of 2018.

Read more:
What the next government needs to do to tackle unfairness in school funding


Another one year extension on funding for early childhood education should be taken at face value: the Coalition says it values early learning but doesn’t yet have a long-term plan.

The remaining initiatives are window-dressing; and like most window-dressing, they don’t change anything fundamental but cost money that could have been used elsewhere.

Frydenberg said “no one knows the needs of a local school better than the school community itself”. This is true but $30 million for libraries, classrooms and play equipment won’t go far. It will also create red tape and duplicate state initiatives, and is very much the type of funding the Commonwealth should stay away from.

One-off funding for infrastructure also has an opportunity cost: $30 million on better evaluation of existing initiatives would have made a real contribution to efforts to improve teaching and learning at the system level.

The remaining initiatives – including arts, life education, preventative health and the constitution – smack of the Commonwealth meddling in areas beyond its remit.

Given the Commonwealth doesn’t run schools, is there anything useful it what could it have announced in the budget? Here are two ideas. The government has promised a national evidence institute, but has not yet announced the dollars behind it.

And it could have chosen to invest in how best to assess the non-cognitive skills that are important for the workforce, but which are currently hard to measure.

More money, but otherwise more of the same

Given Treasurer Scott Frydenberg’s insistence that education is “critical to our prosperity, harmony and advancement as a country”, one might expect a roll-out of major policy reform to accompany such lofty rhetoric.

Despite efforts to focus our attention on the quantum of Commonwealth money earmarked for schools in the public, independent and Catholic sectors, there is precious little in the government’s budget to signal any new shifts in policy focus.

So, what can parents, teachers, students and the public expect from a re-elected Coalition government?

But, it remains to be seen precisely what long-term benefits to student learning can come from a one-off injection of federal funds, especially when this is to be split between the 9,000-plus schools throughout Australia.

Similarly, the announced attention on theatre, music, preventative health and the constitution appears unlikely to make substantive improvements to these critical, and often underfunded, areas. However, $20 million invested over four years to arts and life education appears superficial at best, especially when the overwhelming discourse from this government has been improving the “core skills” of literacy and numeracy.

The announcement of $453 million to extend preschool provision is welcome, but it’s not enough. Currently the government funds 15 hours of preschool education for 3 ½ to 4 ½ years-old children, led by a degree qualified early childhood teacher in the year prior to school.

But when the commitment to the provision of early childhood education was announced by the previous Labor government, the expectation was that it would be sustained by secure, long-term funding. Tonight’s is another short-term agreement that provides funding security for children, families and service providers for only two years.

The benefits of preschool education are well documented. In fact many OECD countries are now investing in two years of preschool prior to school entry. We need a bi-partisan agreement that preschool is the foundation to a modern education system, and, like school, requires a secure and ongoing source of funding.

We also urgently need a new national early years workforce strategy – the previous (and only) one expired in 2016. All our current quality reforms depend on the availability of qualified teachers and educators, but they are set against poor wages and conditions for many working in the sector.