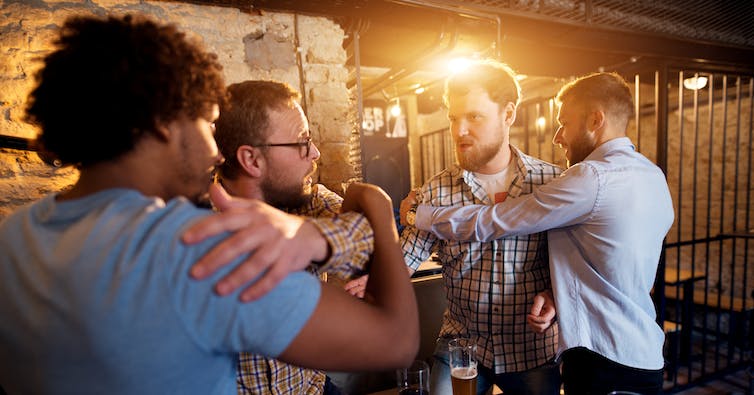 Young men who conform to traditional definitions of manhood are more likely to suffer harm to themselves, and do harm to others, according to a new survey of Australian men aged 18 to 30.

This is the first major Australian survey to map ideals of masculinity among young men, commissioned as part of the Jesuit Social Services’ Men’s Project, which is dedicated to helping boys and men live respectful, accountable and fulfilling lives.

The researchers surveyed 1,000 young men on their attitudes toward seven pillars of traditional manhood: self-sufficiency, toughness, physical attractiveness, rigid gender roles, heterosexuality and homophobia, hypersexuality, and aggression and control over women. These represent what we call the “Man Box”, or the ideals of manhood that can be both influential and restrictive to young men.

The men were asked about their perceptions of societal messages about manhood and their own endorsement of these messages.

Our findings showed that many young men remain greatly influenced by these societal messages of what it means to be a man. For example, young men were particularly likely to agree with statements that society expects men to act strong (69%), fight back when pushed (60%) and never say no to sex (56%).

However, some traditional ideals seem to be dropping away. Few young men agreed that society tells them they should use violence to get respect (35%), straight men should shun gay men as friends (36%), boys shouldn’t learn how to cook and clean (38%), and men shouldn’t do household chores (39%).

There was also a consistent gap between social messages and personal ideals, with lower personal endorsement of every element of traditional manhood.

Still, a sizeable number of young men believed men should act strong (47%), be the primary breadwinners (35%) and fight back when pushed around (34%).

Fewer respondents agreed that men should have as many sexual partners as they can (25%), avoid housework and child care (23%) and use violence to get respect (20%). 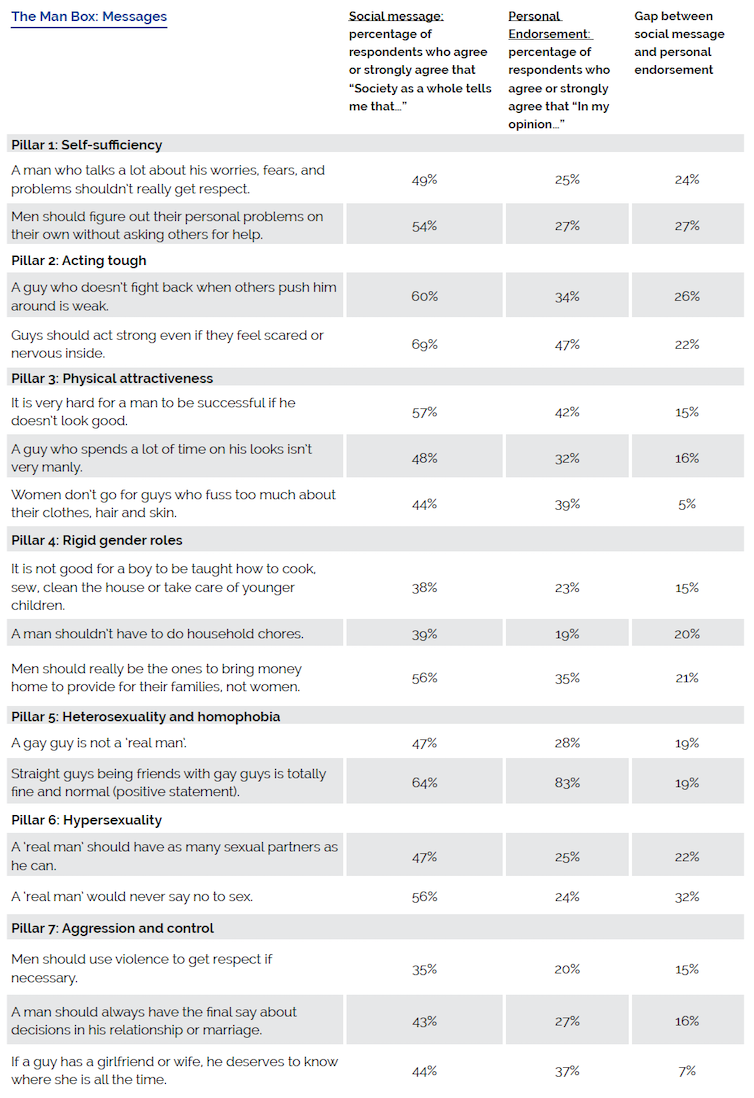 What other researchers have found

Our findings are consistent with other research on the societal impact of traditional masculine ideals.

First, there is a consistent gap between men and women when it comes to views of gender roles. Young Australian men are less aware than young women of sexism and more supportive of male dominance and violent attitudes toward women.

Research in the US has found that young American men are also less aware than young women of the harms of traditional masculinity.

Second, there is diversity among men. Young men have different ways of expressing their masculine identities, depending on their peer groups. There are also large variations among young men in their endorsement of sexism and violence.

Third, men are changing. While the “Man Box” survey is not longitudinal, other research points to shifts over time in men’s attitudes toward gender roles. Other studies have shown more young men supporting gender equality and rejecting violence against women, although there are also signs of regress and backlash.

Conforming to ideals of traditional masculinity has a real cost, both for young men themselves and for the women and men around them.

Our findings show that being inside the “Man Box” – having higher-than-average agreement with traditional masculine ideals – is bad for young men’s health. 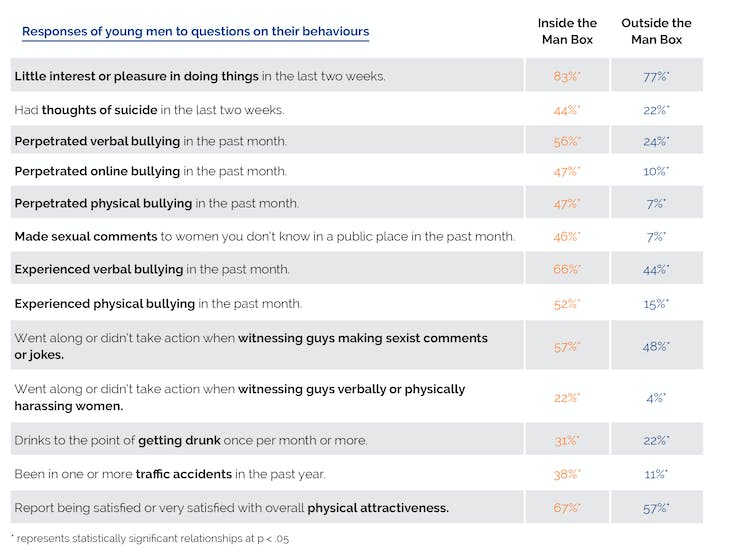 According to our survey, young men in the “Man Box” were more likely than other men to have poor mental health (including feeling depressed, hopeless or suicidal), to seek help from only a narrow range of sources, and to be involved in binge drinking and traffic accidents.

This accords with a large number of other studies that have found men who endorse dominant ideals of masculinity are more likely than other men to have greater health risks and engage in poor behaviours. They are more likely to consider suicide, drink excessively, take risks at work and drive dangerously.

Recent media discussions of “toxic masculinity” have emphasised that patriarchal notions of manhood are dangerous not only for men themselves but for those around them.

Our survey also bears this out. Young men who agreed more strongly with the ideals of the “Man Box” were six times as likely as other men to have sexually harassed women in the last month – making sexual comments to a women or girl they didn’t know in a public place or online. 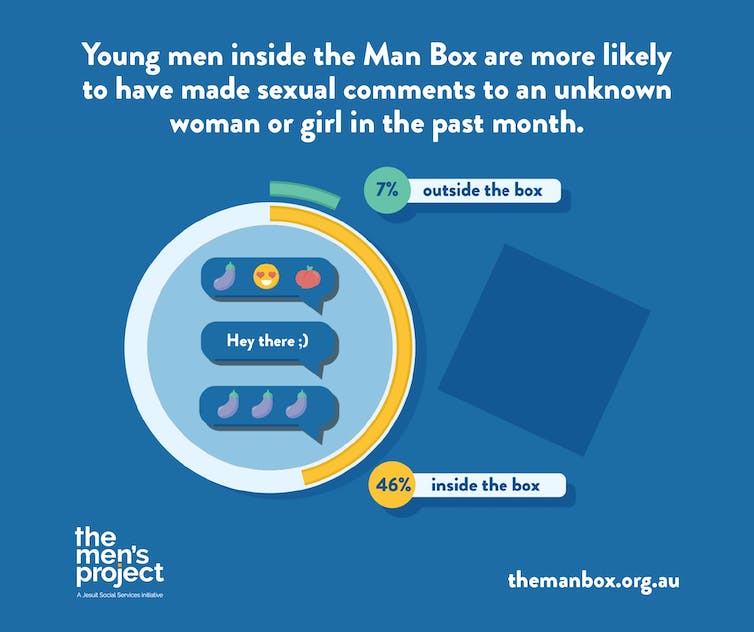 They were also more likely to have bullied other people in the last month, physically, verbally and online. And they were far less likely to intervene when other men were acting violently. 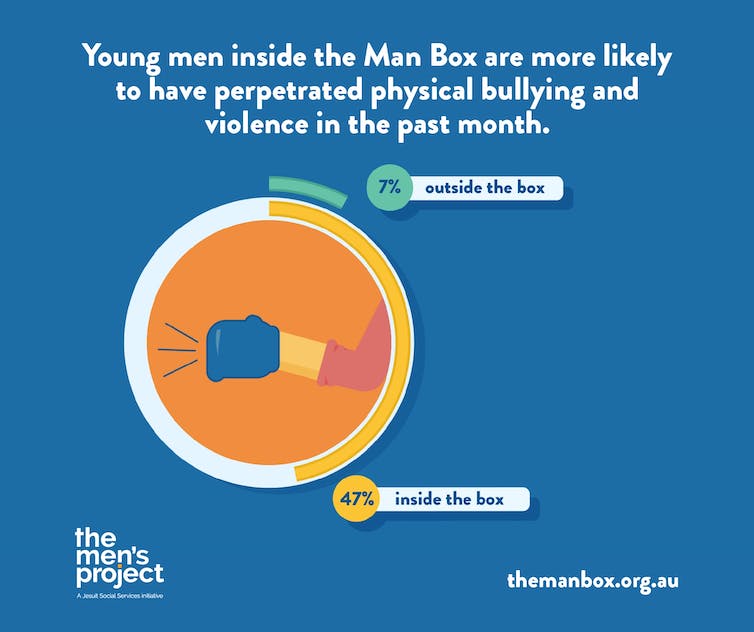 Again, these findings should not be surprising. Conformity to traditional masculinity is a well-documented risk factor in domestic violence. Men are also more likely to rape women if they are hostile towards women, desire sexual dominance, accept rape myths and feel entitled to women’s bodies.

Beyond the ‘Man Box’

There is an urgent need to promote change in the way we view masculinity in Australia. Three tasks are vital.

First, we need to raise awareness of the harms of the “Man Box”. And in doing so, let’s avoid a focus only on harms to men. We must also address how masculinity contributes to ongoing sexism and male privilege in society.

Second, we need to confront traditional masculine ideals and try to reduce their impact on society. We need to engage men and boys in critical conversations about manhood, encouraging them to embrace identities of their own making rather than conforming to constrained masculine scripts. We should also highlight how young men are changing and adopting diverse viewpoints on what it means to be a man.

Third, let’s promote healthy and ethical alternatives to traditional masculine ideals. Whether we call it “healthy masculinity” or something else, we need to promote ideals for boys’ and men’s lives that are positive, diverse and gender-equitable.