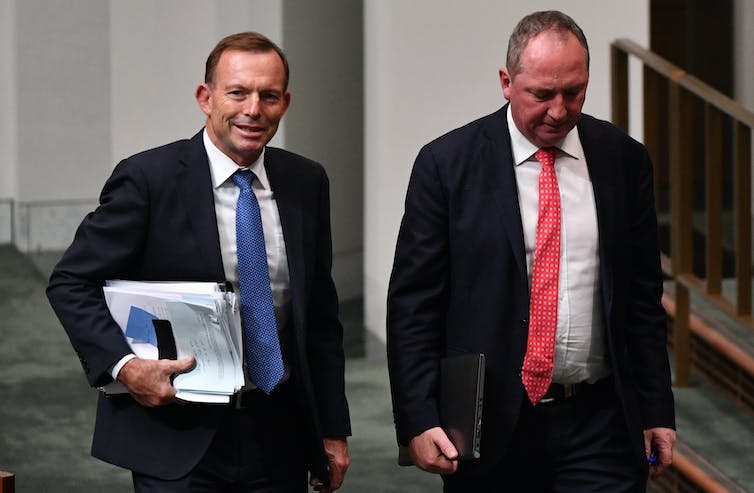 Tony Abbott and Barnaby Joyce have each accepted job offers from new Prime Minister Scott Morrison to serve as his special envoys.

The prime minister’s offers may have been a clever way to keep these two former leaders busy and put their abilities to use. But these jobs may have inadvertently rendered both Abbott and Joyce disqualified from parliament under section 44 of the Constitution. That section disqualifies any MP who accepts a paid job in government that is not a ministerial position.

Special envoys are not ministerial positions. Neither Abbott nor Joyce is part of the Morrison ministry. Their roles are to work with the relevant ministers and the prime minister to advance policy in these respective areas. The precise details of what they will be doing are not yet clear.

Section 44 of the Constitution sets out several grounds on which a politician will be disqualified from membership of parliament. Being a dual citizen is only one of them.

Another ground for disqualification is set out in section 44(iv). That provision disqualifies anyone holding an “office of profit under the Crown”, unless the position is that of a minister.

The special envoy roles look suspiciously like offices of profit under the Crown.

What is an office under the Crown?

There is no doubt the special envoys hold offices under the Crown.

In Re Lambie (No 2) from March this year, the High Court decided that Jacquie Lambie’s successor, who was the Mayor of Devonport in Tasmania, was not disqualified under section 44(iv).

The High Court held that a position is under the Crown if hiring or firing decisions are made by the executive government. Mayors are voted in and out by the people, rather than hired and fired by governments.

Positions like Speaker of the House of Representatives, Leader of the Opposition, and Chairperson of a Parliamentary Committee are not “under the Crown”. They are parliamentary positions.

The key issue is whether the special envoy positions are “of profit”.

Is the position of special envoy “of profit”?

It has been reported that Abbott and Joyce were offered remuneration for their special envoy roles.

On the same day, having already accepted the special envoy job, Tony Abbott told 2GB radio host Ray Hadley that he would not be receiving any pay for his role as Special Envoy. Abbott said: “The other thing I want to say, Ray, is that I certainly don’t expect any extra pay”.

Hadley had not asked Abbott about payment. Abbott simply made the comment off his own bat.

This all suggests that Abbott may have been offered remuneration for the special envoy job, but decided to decline that offer.

The High Court has said that to fall foul of section 44(iv) it does not matter whether a person is actually paid. What matters is “the character of the office”.

In the 1992 case of Sykes v Cleary, the High Court held that Philip Cleary, who had won the federal seat of Wills, was disqualified under section 44(iv). Cleary was a teacher who was on leave without pay at the time of the election.

The High Court decided that it doesn’t matter whether a person is actually receiving payment. What matters is whether payment attaches to the position. Cleary held an office of profit under the Crown even though he was not receiving any payment.

The taking of leave without pay by a person who holds an office of profit under the Crown does not alter the character of the office which he or she holds. The person remains the holder of an office, notwithstanding that he or she is not in receipt of pay during the period of leave.

Logically, the same reasoning applies to an office-holder who waives their right to payment or declines to take a salary. A person is not saved from disqualification because they are not currently receiving payment.

Abbott and Joyce will be disqualified if, and this is the crux of the issue, remuneration was originally part of the special envoy job offers.

If a non-ministerial position answers the description of an “office of profit under the Crown” then the holder of that position is disqualified.

Could Abbott and Joyce really be disqualified?

A clear answer is needed to the question of whether Abbott and Joyce were offered payment as part of their special envoy roles. Morrison, Abbott or Joyce could each easily answer that question.

If payment was indeed offered as part of the roles, the only way the issue of disqualification could be decided authoritatively is for the House of Representatives, where the government has a slim majority, to refer Abbott and Joyce to the High Court.

It is unlikely the government will refer Abbott and Joyce to the High Court, and quite likely that the opposition will pursue the issue – and also Peter Dutton’s potential section 44 problem – when parliament resumes in September.