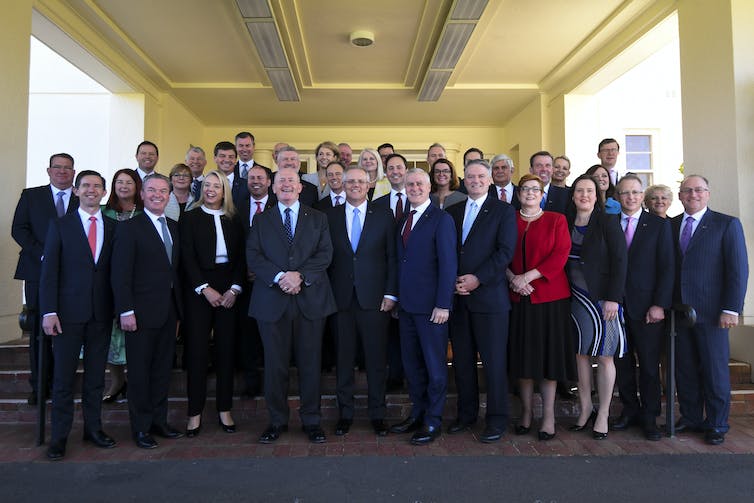 Politics isn’t rational. Prejudice trumps performance. Politics is run by thugs. These are three reasonable conclusions from the snubbing of electorally popular Julie Bishop in last week’s Liberal leadership ballot, and Bishop-ally Julia Banks’ decision not to stand at the next election to protest bullying during the leadership campaign.

Why did it happen? Does politics have to work this way?

There are four facets to why Bishop, far away the most likely to maximise the Liberal vote at the next federal election, is not now prime minister.

Firstly, there is not so much a “woman problem” as a “man problem” on the conservative side of politics in Australia. The Liberal Party room is dominated – and increasingly so over the past generation – by male MPs who anoint leaders in their own image.

Last week they looked at Peter Dutton, Scott Morrison and Bishop and chose the one who is, if you average out the demographics of current Liberal MPs, their identikit picture. This reinforces the collective power of men in the Liberal party room, maximises their comfort level and is, until exposed to political reality in the form of a general election, an approach easily sold on the inside as “common sense”.

Secondly, the reluctance of Liberal women to name and organise around the liberal feminism they actually practice, psychologically undercuts their power and keeps them in a prone position.

They need to name and unashamedly organise around the set of ideas that can end the present male Liberal monoculture in a way consistent with their political philosophy: that is, liberal feminism. Every time Bishop and those like her shy from declaring themselves liberal feminists, they pull the rug from under not only under their own feet, but also from under the feet of every other Liberal woman around them. It’s time they staked out their philosophical ground.

Thirdly, Liberal women have to stake out their organisational ground too. They have yet to apply obvious lessons from overseas examples of how to organise and achieve change. As a British Conservative Party opposition frontbencher in 2005, the now British prime minister Theresa May established “Women2Win” to get more Tory women into parliament: the number of female Conservative Party MPs in Britain has since nearly quadrupled. Where is the Australian equivalent? Only Liberal women can make it happen.

And fourthly, in Australia, because of its particularly brutal gender politics, quotas have to be part of the answer. The long-held, empirically unarguable view of experts like ANU political scientist Marian Sawer is that the Liberals’ refusal to adopt Labor-style minimum quotas for women’s pre-selection in winnable seats is dragging women’s parliamentary representation here backwards.

Australia has moved from 15th place in the world in terms of women’s overall parliamentary representation in 1999 to 50th place in 2018 – an astonishing regression entirely down to the fall in female conservative MPs. Liberal women should accept the findings of sustained research in this area and make quotas central to their bargaining agenda.

Globally, the most successful conservative politician of the 21st century, by a very long margin, is a woman: German Chancellor Angela Merkel. If you want to see someone dispatch a thug, watch Merkel deal with US President Donald Trump. The British Conservative Party has already had two women prime ministers: Margaret Thatcher and Theresa May. There won’t be a female Liberal prime minister here until Liberal women themselves organise with moderate allies to boost their numbers and normalise their presence in the party room.

Nor is this just an internal Liberal Party problem. It’s in the interests of all Australian voters for the Liberals’ “man problem” to be fixed since the consequences of being hostage to it, as we are now seeing, are so bad.

Like a river dying from lack of water, increased party political involvement overall has to underpin change like this. More “occasional politicians”, as Max Weber described them, are needed and fewer political apparatchiks. More doing your civic duty by joining a political party and voting in preselections rather than leaving these crucial choices to the sad, mad and self-seeking. It means reasonable people not folding and leaving in the face of pressure from the thugs, but rather binding together and seeing the thugs off.

Politics can, and has been, more rational. Prejudice doesn’t have to, and hasn’t always, trumped performance. Politics doesn’t have to be run by thugs.

When the histories are written, the Liberal “moderates” appeasement of the party’s thuggish right-wing, both in policy and personnel, will be revealed as central to former prime minister Malcolm Turnbull’s downfall and the party room’s failure to elect Bishop his successor.

Early this year, the numbers were there for moderate NSW Liberals to defeat the preselections of key right-wingers Tony Abbott in Warringah, Craig Kelly in Hughes and Angus Taylor in Hume. Internal discussions occurred over whether to do so. Turnbull and every key moderate squibbed the chance.

You can’t beat thugs through appeasement. You’ve got to get rid of them. Cleaning up the Liberals right-wing is the challenge for a future leader – a real leader.