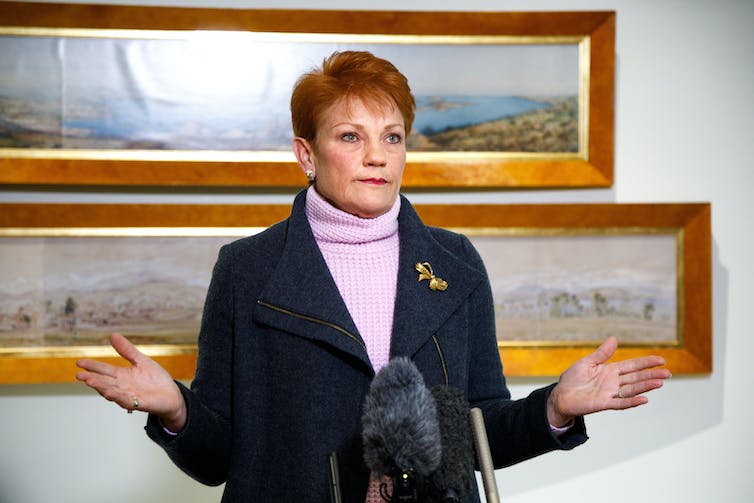 Chris Salisbury, The University of Queensland

Twenty years since its spectacular electoral debut in Queensland, Pauline Hanson’s One Nation remains a potent, if enigmatic, political force. Despite the party’s internal volatility and public displays of disunity, it’s still poised to play a significant role in the next federal election, especially in key marginal seats in Queensland.

The weeks approaching the winter parliamentary break have witnessed almost daily revelations of One Nation’s in-fighting, keeping Pauline Hanson in the headlines.

Recent ineligibility rulings, resignations and demotions have enveloped the party in a seeming storm of self-implosion.

Its stocks in the federal senate, where it had four senators elected in 2016, are now diminished. Depending on out-of-favour senator Brian Burston’s decision concerning his future with the party, there may be further attrition to come.

Many observers have noted how these public rows between Hanson and party colleagues, and the loss of numbers in parliament through bad blood or bad management, recall events in the party’s shambolic formative years. Some predict that history is set to repeat, and One Nation is again on a rapid path to self-destruction.

But such assumptions might underestimate the stubborn persistence of Hanson and, importantly, her party’s supporters.

June 13 marks the 20th anniversary of the 1998 Queensland state election, when Peter Beattie was first elected Premier amid One Nation’s storming onto the electoral scene. The election returned the ALP to office in Queensland, beginning a 14-year period of Labor hegemony in that state, but also created a legacy of a different kind for One Nation and its controversial figurehead.

That same election set a benchmark for minor party disruption of the status quo that others (including, lately, the revived One Nation) have aimed for but fallen well short of ever since.

Fifteen months after the party’s formation in March 1997, One Nation won 22.7% of the primary vote and 11 seats in Queensland’s parliament, delivering a shock to the political “establishment”.

But within the space of eight months, punctuated by its MPs’ ill-discipline and organisational turmoil, the party disintegrated into a handful of independents and the newly-formed (and short-lived) City Country Alliance party. With the exception of two of these independents, all other former One Nation MPs lost their seats at the next state election, in Peter Beattie’s landslide 2001 victory.

One Nation’s barnstorming debut at that 1998 election was subsequently thought to be a “flash in the pan”. But this perhaps overlooks that One Nation retained seats in Queensland’s parliament until the party’s last remaining MP, Rosa Lee Long, lost her seat of Tablelands in 2009.

More recently, Hanson very nearly won the state seat of Lockyer for One Nation at Queensland’s 2015 election. The “unschooled” behaviour of the party’s elected MPs and officials was not enough to turn all its supporters away from the maverick fringes of politics and back toward the mainstream parties.

The intervening years haven’t seen the major parties entirely recoup earlier losses of support. In the absence of One Nation, voters abandoning the established parties have been attracted to the likes of Katter’s Australian Party, the Palmer United Party, and other eponymous state and federal groupings.

Recent elections at state and federal levels have seen diminishing primary vote support for the major parties and a surge in popularity (if not exactly translated to electoral success) of smaller parties.

Since re-emerging in recent years, One Nation has attracted 5-15% of the primary vote at state elections in Western Australia and Queensland – despite falling well short of expectations. In the electorates it actually contested, the proportion is much higher, climbing into the 20s and low 30s.

It seems the “protest vote” element in the electorate hasn’t really gone away since One Nation first departed the scene, and is now at record levels. As witnessed in Queensland’s recent state election, almost 31% of primary votes were cast for non-major parties, exceeding the 30% non-major primary vote at the 1998 election.

In this atmosphere of volatile voter sentiment, Hanson – in addition to a slew of other, newer minor party identities – has well and truly established herself on the political scene again.

Polling undertaken in the federal seat of Longman, due to go to a by-election in late July, has shown increased support for One Nation. This is at the potential cost of the former Labor incumbent, Susan Lamb – who narrowly won the seat from the government in 2016 in part due to One Nation preferences.

This underlines the extent to which Hanson’s party is likely to influence the outcome in several Queensland seats at the next federal election, making the state again a key electoral battleground.

One Nation has now been on the political scene almost as long as the DLP or the Australian Democrats – perhaps its period in the political wilderness extended the party’s shelf-life and appeal to a new swathe of “disaffected” voters.

Despite its dysfunction – frequently laid at Hanson’s feet – and often inconsistent policy positions, the party has cemented an influential place in the federal arena, albeit a status that’s on the verge of diminishing drastically.