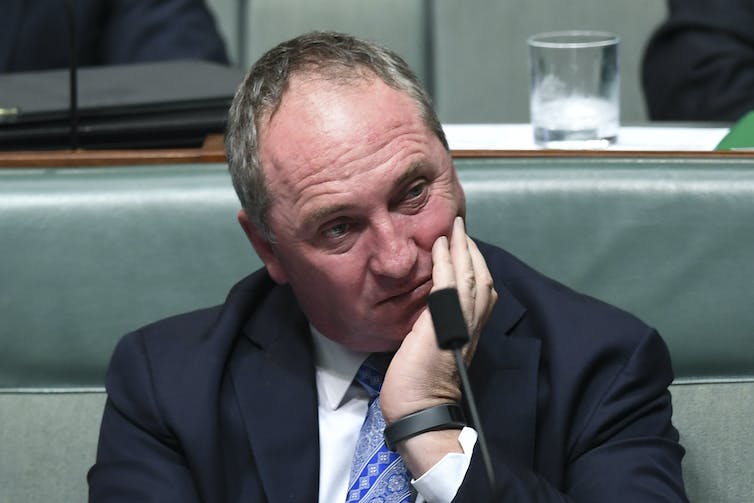 Barnaby Joyce’s decision to accept money – reportedly $150,000 – from Channel Seven in return for giving an interview about his relationship with his former staffer Vikki Campion, calls into question his fitness for public office.

It betrays a complete lack of understanding of the convention that in democratic political systems, public officials are accountable through the media to the people. That responsibility to be accountable comes with public office. It is not a marketable commodity.

To treat it as such is a fundamental breach of the professional ethics of a public officeholder.


So far, his fellow Coalition MPs have failed to come to grips with this central problem. While none of those who have spoken publicly have tried to defend Joyce’s decision, most have either equivocated or contented themselves with general statements of disapproval.

Michael McCormack, Deputy Prime Minister and leader of the National Party, which Joyce represents in the seat of New England, told ABC radio he would “have a yarn” to Joyce, as if it were some casual matter of no particular importance.

Malcolm Turnbull, who previously got himself in hot water by preaching morals to Barnaby Joyce about marital fidelity, this time is saying he will be “circumspect” and speak to him in private.

To date, only the Financial Services Minister, Kelly O’Dwyer, has spoken her mind publicly, saying she believed most Australians would be “disgusted” by Joyce’s behaviour.

As if it couldn’t get any worse, has Joyce now hung Vikki Campion out to dry, saying it was she who made the decision to accept the money.

From a professional ethics perspective, it makes no difference which of them made the decision. The fact is their relationship became a matter of legitimate public interest once it was revealed it led to the expenditure of public money in finding Campion a government job outside Joyce’s office, given her presence inside it had become untenable because of their affair.

Several other factors added to the legitimate public interest in the matter, because in the end they brought about his resignation as deputy prime minister:

In a democratic society, public officials are held to account for mistakes like these. The media are the primary means by which this is done: that is what is meant by the term the “fourth estate”. It does not rest on formal legal power but on a convention that has its roots in 18th century English constitutional arrangements.

When a convention that is so central to the working of democracy is flouted, as it has been here, both parties – Joyce and Channel Seven – are seriously at fault.

To reduce these abstractions to everyday language, if someone says: “I was paid to say that” the ordinary reasonable person is entitled to disbelieve what was paid for.


When that happens in an exchange between a public official and a media outlet, the accountability required by convention is subverted.

As for Channel Seven, it is subject to the television industry code of practice. It is a limited document, silent on the ethical issues raised here.

Now, the code needs to be amended to make this kind of arrangement a breach punishable by the imposition of a condition on the broadcaster’s licence.

This makes it a matter for the broadcasting regulator, the Australian Communications and Media Authority, which is required to approve the code and is empowered to have it reviewed.

Meanwhile, we may sit back and marvel at the hypocrisy involved, as Campion complains to the Australian Press Council about the newspapers’ breach of privacy in reporting her pregnancy, while she and Joyce take money from a television channel to tell even more about it.

And Joyce blames it all on the absence of a general right to sue for breach of privacy. If there had been such a law, he says, then he and Campion would not have been subject to invasive drones and paparazzi stakeouts at their home. If they had not been persecuted like that, they would not have felt the need to be compensated by selling their story.

The logic is not persuasive, but if he survives in office, perhaps Joyce could bring forward a private member’s bill introducing a tort of privacy.