The British Prime Minister says there is no alternative to use of force in Syria.

President Trump directly addressed Russia and Iran, two countries that have supported the embattled regime of Syrian dictator Bashar al-Assad: “What kind of a nation wants to be associated with the mass murder of innocent men, women, and children?”

“By conducting strikes on Syria, the US is violating all international norms, and Russia views this as an act of aggression,” says Alexander Sherin, chairman of the State Duma Defense Committee.

‘The US President Donald Trump is not just a criminal for the whole world, he is Adolf Hitler number two,’ said Alexander Sherin, chairman of the State Duma Defense Committee.

With the start of the air strike Syrian media is reporting air defense systems being activated over multiple areas in Damascus as explosions sounding.

Three scientific research facilities and a number of Syrian army bases in Damascus have been struck in attack.

President Donald Trump has said the UK and France have are the art of the airstrikes in Syria.

Trump also said the U.S and its allies are prepared for a “sustained” response until Syrian government stops use of chemical weapons.

The strike is a response to the alleged chemical attack which killed dozens of people in the Syrian town of Douma.

US Senator Bob Casey tweeted: “While Bashar al-Assad must be held accountable for his unlawful use of chemical weapons against civilians, the strikes that are being carried out are being done without an authorization from Congress, which is unacceptable” 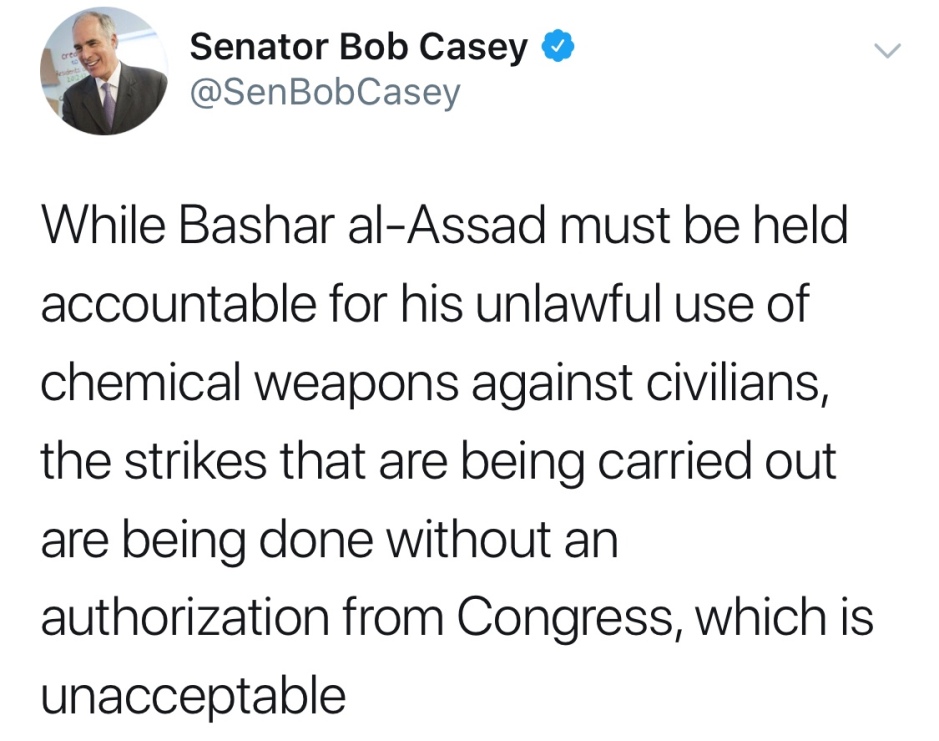 Over the last couple of days U.S. officials have expressed “high confidence” that Syria carried out last week’s chemical weapons attack in Douma, promising the West will respond and that all options remain on the table.