MOSUL, IRAQ — For the first time in the more than three years since Islamic State militants took over vast swaths of Iraq and Syria, Iraqi Christians have gone to church to celebrate Christmas in Mosul — a former militant stronghold. Worshipers and Muslim activists say they are hoping the holidays may bring some healing.

During the time Islamic State militants ruled Mosul, this church was a prison. 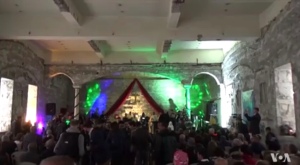 Today, worshipers celebrate Christmas here for the first time since Islamic State militants took over the city in 2014, forcing the entire Christian population — about 200,000 people — to flee.

“The situation made us so sad. This is our city, our grandparents’ city. We lived here, we grew up here. We built our schools, universities, churches families and friends here,” said Fadi, a worshipper.

During the nine months Iraqi and Coalition forces battled to take back Mosul, another million people fled their homes, nearly all Muslims.

Worshipers at this church say they hope to go home if or when they are more confident Mosul is safe, but so far, less than a dozen Christian families have returned.

Both Christians and Muslims attended the service today hoping that once again Mosul will start to re-grow its diversity.