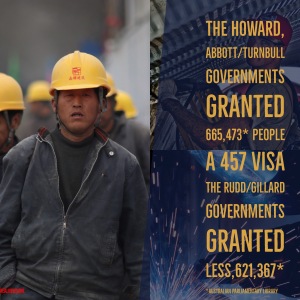 The ACTU has labeled the Prime Minsiter’s 457 Visa announcement as a spin excercise. ”On the face of it, it looks like a cynical attempt to rebrand a wildly unpopular policy” said ACTU President Ged Kearney.

The ACTU states that the abolishing of the 457 visa scheme and replacing it with temporary workers scheme will not address the real concern of unemployed Australians.

Fixing a broken migration system will take more than a re-brand stated the ACTU.

“It doesn’t matter what you call the visa scheme itself, what matters is that Malcom Turnbull put an end to the exploitation of workers and Of work visas” said Ms Kearney.