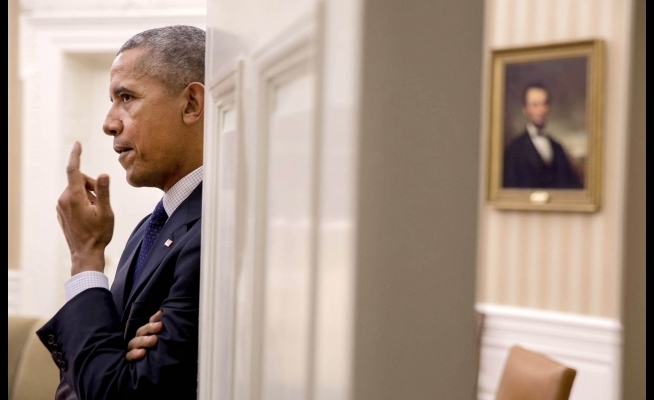 President Donald Trump has been trashing the economy and his predecessor’s legacy lately.

For example, in his free-wheeling Feb. 16 press conference, Trump said he “inherited a mess” from President Barack Obama. His newly minted Treasury Secretary Steven Mnuchin followed suit a week later by telling the Wall Street Journal that Obama’s policies are to blame for the slower-than-normal growth the U.S. has experienced since the financial crisis in 2008.

While you wouldn’t know it from the way the Trump team has been talking about it, the economy is actually in pretty good shape. The current economic expansion just became the third-longest on record. The economy has been adding jobs every month for more than six years, the longest winning streak since World War II. And the federal budget deficit has sharply declined from a high of 9.8 percent of GDP in the middle of the Great Recession to a manageable 3.2 percent last year.

This is not to say that there aren’t problems. Economic growth has been below potential, and many workers are still suffering from disproportionately high unemployment, particularly African-Americans, Hispanics and people with less education.

But all in all, Trump inherited a strengthening economy that just needs a little help and specific interventions to help a wider swath of Americans share more quickly in the continuing economic gains.

So why would he want to make you think it’s a “mess”? The most likely reason, in my view, is that portraying the current state of the economy as rotten helps the administration justify the wholesale change in policies that it is planning. It also lowers the starting bar so that it’s easier to declare victory later.

But the economic policies that he has suggested, including most of his tax cuts he mentioned in his Feb. 28 speech to Congress, would jeopardize the solid economic gains made in the Obama era. To see why, let’s examine just what Obama left on Trump’s doorstep.

Steady as she goes

The current economic expansion that started in June 2009 has lasted more than seven and a half years, making it now about the third-longest the U.S. has ever experienced.

Over the course of President Obama’s entire time in the White House, which included the tail end of the Great Recession, the economy grew on average by 2 percent each year. While this is a fairly moderate pace by historical standards (3 percent has been more typical of past expansions), it’s faster than during President George W. Bush’s two terms in office. And most importantly, the growth has been remarkably steady.

So Mnuchin’s right that growth has been less than stellar but wrong in trying to place the blame entirely on Obama’s policies. According to a 2014 paper by Harvard economist Kenneth Rogoff, slower growth is a result of a variety of factors, including rising inequality, less public investment, an aging society and lagging overseas economies.

Congress’ obstruction of President Obama’s policy agenda and cuts in government spending immediately after the crisis did not help matters.

Jobs and wages on the rise

As a result of the steady economic growth, the unemployment rate has fallen to the lowest level since the recession hit.

The economy has now added jobs for 76 months in a row, adding an average of 200,000 each month, cutting the unemployment rate by more than half from its peak of 10 percent in October 2009 to 4.8 percent in January. The share of people employed between the ages of 25 years and 54 years rose from 75 percent to 78.2 percent during this period.

Rising employment opportunities have also fueled growth in workers’ wages, which have climbed each year for the past four. Average hourly earnings for nonsupervisory production workers climbed 4.8 percent from January 2013 through this past January (after factoring in inflation). It is not surprising, then, that the median household’s income jumped 5.2 percent from 2014 to 2015, the last year for which data are available. That is the fastest one-year gain since 1968 and reversed years of decline.

Still, it’s not all great news. Close to six million people involuntarily worked part time in January, likely hoping for further improvements in the labor market. While this is well below the more than nine million people who worked involuntarily part-time amid the height of the Great Recession in 2009, finding work for everybody remains a challenge.

In addition, income inequality remains near record highs after narrowing slightly in 2014 and 2015 as the incomes for top earners have soared.

But again, the targeted policy solutions that in my view would offer the most benefits are effective infrastructure investments, higher minimum wages and stronger unions to boost economic and job growth and reduce inequality.

In contrast, Trump’s plans often involve reversals of Obama-era policies (such as the Affordable Care Act and the fiduciary rule) that were making progress in these areas.

A measure of our government’s health that is usually near and dear to the heart of conservatives is the budget deficit and national debt. And there’s lots of good news on that score as the expanding economy and stronger labor market have filled the government’s coffers with more revenue, slashing the deficit in the process.

In the darkest days of the Great Recession in 2009, the deficit reached a peak of 9.8 percent of GDP as the economy weakened and the government spent hundreds of billions trying to stimulate growth. By fiscal year 2016, it had narrowed to less than a third of that at 3.2 percent.

The Congressional Budget Office estimates that the deficit for fiscal year 2017, which started in October 2016, will fall again below 3 percent of GDP. Over time, budget deficits will likely increase again, unless the economy grows faster, this phrase re boomers confusing, suggest losingfor example, as more and more baby boomers retire. Reasonable reform to Social Security that emphasizes the need for more revenues to counter the perilous effects of rising inequality alongside sensible tax reform could start to address the widening gulf between government income and spending.

President Trump, though, appears to be relying on unrealistic massive program cuts to pay for tax cuts and on wishful thinking – massive new deficits are okay because the faster growth that may come some time in the future will pay for them. The reality, in my view, is that his proposals likely will end in enormous new deficits with little to show for them.

President Obama left his successor a strong foundation on which to build real economic prosperity. If he pursues policies that weaken it, he could end up putting the whole structure – and people’s economic security – at risk.