There are reports of a ramming attack in Jerusalem. At least 4 Israeli soldiers killed and 15 injured after a Palestinan terrorist plowed his truck into them. The soldiers were getting off a bus at the Haas-Sherover  promenade, a popular tourist spot, when the truck ran into them. 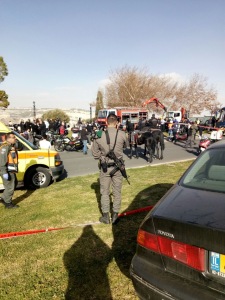 It is alleged that  a white Mercedes truck, drove straight into promenade full of pedestrians. The truck is a flatbed carrying a crane. The truck came from the direction of the Arab Jabel Mukaber neighborhood.

There were 50 emergency vehicles. The Driver was shot & neutralized.

“It is a terrorist attack, a ramming attack,” a police spokeswoman said on Israel Radio, which reported that bodies were “strewn on the street”. The report said the driver of the vehicle was shot.

Emergency crews say soldiers are trapped under the truck after the Terrorist plowed into them killing at least 3, some reports say 4.

Times of Israel reports that the Haas-Sherover Promenade promenade is a southern location that offers a panoramic view over Jerusalem and the Old City. In May two elderly women were stabbed and moderately injured in a park below the promenade in what police said was a terror attack.

This is a developing story