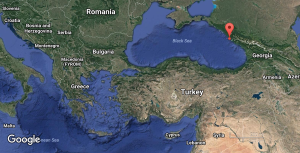 A Russian Military jet  disappeared twenty minutes after takeoff from radars in Sochi at around 5:40 am. It  crashed  in the Krasnodar Territory in the south of the country. RT.com has reported that the plane took off from Sochi Adler Airport on a “planned flight” and failed to check in with the control tower at 5:40am Moscow time.

The Russian defence ministry says there are no survivors after the plane crashed into the Black Sea. 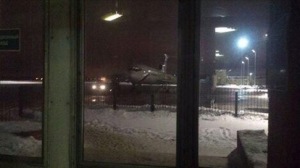 The TU 154 plane before takeoff

The Russian Ministry of Defence said the plane underwent Routine Maintenance in September and was piloted by an experienced Pilot. The Russians do not think terrorism was involved in the crash.

The first victim was found 6 km from Sochi coastline following the crash according to the Russian Defense Ministry spokesman Maj. Gen. Igor Konashenkov.

The Russian Federal Service for Employment and Labor Relations sent their representatives to Sochi to investigate the incident. The  ministry has said the families of the victims will receive insurance payments.

TASS reports that weather conditions in the regions were “favorable” to aviation. No civilian flights have been cancelled yet.

A Mi-8 helicopter and several vessels were sent from Sochi to the area of the crash.
Debris and personal belongings of passengers were found some 1.5 km from black Sea shore.

The Federal Air Transport Agency (Rosaviation) told RIA Novosti that the flight was “not civilian”.

It was carrying  92 people, initially it was reported that the plane was carrying some 70 people, the list of passengers includes journalists, military personnel and musicians from Alexandrov Ensemble. The musicians were due to take part in a New Year’s concert at the Russian airbase in Latakia, Syria.

All rescue services of Krasnodar Krai and neighboring regions are engaged in the search operation.

The Russias have launched a criminal Investigation into the crash.  Military investigators have already seized documents and interrogated persons who arranged for the flight to Syria.

Who are the Alexandrov Ensemble?

From other sites:
Sputnik: Russian Military Jet Reportedly Disappears From Radars After Takeoff in Soch