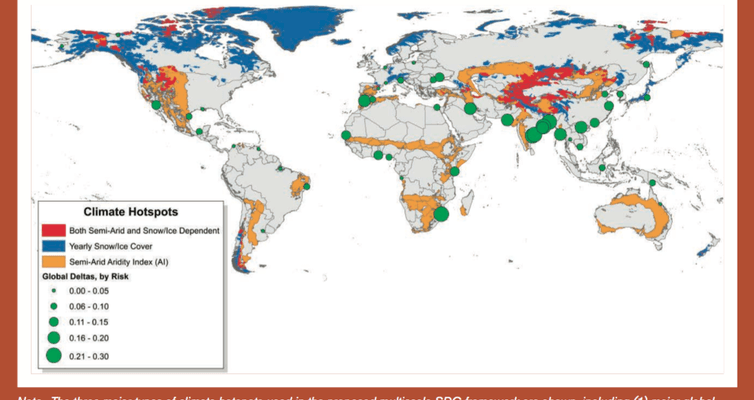 Climate change ‘hotspots’: why they matter and why we should invest in them

The consequences of climate change are already being felt all over the globe. But some regions are particularly affected. These so-called “hotspots” are areas where strong physical and ecological effects of climate change come together with large numbers of vulnerable and poor people and communities.

Climate and development policy must pay special attention to these regions. With the Paris Agreement in force, and talks under way in Marrakech to fill in the details, now is the perfect moment.

A 2015 study identified three types of climate change hotspots: 1) deltas in Africa and South Asia; 2) semi-arid regions in Africa and parts of South and Central Asia; 3) glacier- and snowpack-dependent river basins, especially in the Himalayas.

Livelihoods will be threatened

People living in these regions largely depend on their immediate environment for food and income, so they’re particularly threatened by any changes to temperatures, rainfall or the seasons.

Under normal circumstances, people can diversify their income and become more resilient through grazing their cattle on communal land or growing their own crops. But climate change threatens this “safety net” and may leave people more vulnerable to external shocks like the recent severe drought across southern and eastern Africa. In Niger and the wider Sahel region, drought is a recurrent environmental crisis with strong negative impacts on food and nutrition security leading to famines, especially among the most vulnerable people.

Droughts are just one of the natural hazards that are becoming more frequent and more severe due to climate change. In semi-arid climate change hotspots, these hazards affect livelihoods and will likely hamper socio-economic development.

While they represent just 1% of the Earth’s surface, river deltas are home to half a billion people, a number which is projected to increase. They already include many large cities such as Bangkok or China’s huge Pearl River urban area. And fertile delta soils contain some of the world’s best agricultural land and are thus critical to ensuring no one goes hungry.

Yet these delta hotspots are already at increasing risk of sinking, thanks to humans extracting underground oil, gas and water and weakening underlying sediments. When combined with rising sea levels caused by climate change, and more frequent typhoons, hurricanes and storms, river deltas can expect even more pronounced flooding and coastal erosion in future.

In many deltas, soil and water is also becoming increasingly salty, which threatens food production and could see many people forced to migrate.

Why we must invest in hotspots

These challenges require urgent attention. The impact of climate change will continue to grow, as will the global population. Without serious strategies to address climate mitigation (by stopping emissions of greenhouse gases) and adaptation (new farming systems, flood barriers and protection of coastal wetlands, for example) people living in climate hotspots will become ever more vulnerable.

This is a good starting point. However, in the climate change hotspots, the combination of environmental and socio-economic challenges demand specific responses. As we highlighted in a recent publication together with colleagues from different fields on “Making SDGs Work for Climate Change Hotspots”, these vulnerable regions require extra monitoring in order to avoid development impasse.

We urgently need a thorough analysis of possible policy solutions for climate change hotspots. Without a coordinated effort to specifically address these challenges, the goals and targets of the sustainable development agenda are likely to be at risk.