Berlin: A Truck has plowed  into a crowded Christmas market in Berlin,outside the Kaiser Wilhelm Memorial Church on Monday evening, 8:14 pm . At least 12 people are dead and multiple others injured. Witnesses said the popular Christmas market was packed with tourists and locals when the truck, believed traveling in excess of 60 kilometers an hour, slammed into it. Authorities said the vehicle was loaded with steel beams.

Authorities say that the violence was “deliberate.” There is no road within the vicinity, according to an eyewitness. German chancellor Merkel says “this is a very difficult day; I am disappointed, shocked and very sad about what happened yesterday”

German media says the suspect  was 23-year-old emigrant from Pakistan or Afghanistan named as Naved B who arrived in Germany a year ago. The daily Tagesspiegel said the man was known to the police for minor crimes, but not terror links.

What we know:
– 12 dead
– 48 injured
-A suspect has been arrested but it is not known if he was the driver
– Truck hijacked
– 2nd person found dead in cabin

Die Welt said special forces had stormed a hangar at Berlin’s Tempelhof airport where they believed the suspect – who the German newspaper identified as a 23-year-old Pakistani – had been living in a shelter before the attack.

It is alleged that the suspect fled the scene after the incident and was caught by police near the Victory Column monument. A Polish man, thought to have been the truck’s registered driver, was found dead on the passenger seat, and police said he had not steered the vehicle. It is believed that the truck had been hijacked. 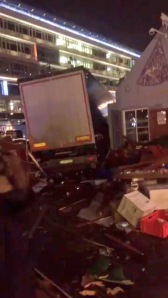 The owner of the truck  from Poland,Ariel Zurawski, says the truck was supposed to be driven by his cousin. Mr Zurawski also claims he has had no contact with the driver since noon local time. “They must have done something to my driver,” Zurawski told German TV24.

The attack  resembles the horrific terrorist act in Nice, France.French police linked that July 14 attack, which killed 86 people and wounded more than 400 others, to a Tunisian national with reputed links to Islamic State extremists. Suspect Mohamed Lahouaiej-Bouhlel has not yet gone on trial.

President-elect Donald Trump branded it an act of terrorism, tweeting: ‘Today there were terror attacks in Turkey, Switzerland and Germany – and it is only getting worse’