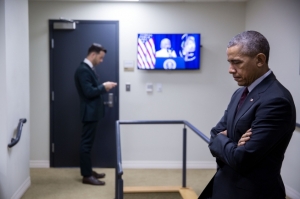 President Barack Obama says that after government officials realized Russia had hacked the Democratic National Committee email system, he told Russian President Vladimir Putin to “cut it out” during a G-20 meeting in China in September.

During his year-end news conference at the White House on Friday — possibly the last full news conference of his presidency — Obama said American intelligence officials became aware about six months ago of the extent to which Russian hackers had penetrated the DNC. The president said his main concern was to ensure the cyberattacks did not escalate, compounding the problem, and “affect the actual election process itself.”

To make sure that didn’t happen, Obama said, when he saw Putin in China, “I felt that the most effective way … was to talk to him directly and tell him to cut it out, and [that] there were going to be serious consequences if he didn’t.”

“We did not see further tampering of the election process, but the leaks from WikiLeaks were already out there,” he added.

When asked whether he thought the U.S. general election last month was a free and fair vote, Obama said: “I can assure the public that there was not the kind of tampering with the voting process that was a concern and will continue to be a concern; that the votes that were cast were counted, they were counted appropriately. We have not seen evidence of machines being tampered with. That assurance, I can provide.”