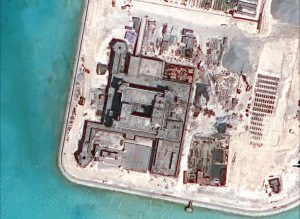 The statement was made by China after the release of images showing the construction of a series of hexagonal structures on seven islands in the area. Along with the structures the Chinese have also installed anti-aircraft and anti-missile systems.

The installation of the systems and the construction of the structures came after China said it has no intention to militarize the islands.

Tension has been growing in the area between China, Malaysia, Vietnam, the Philippines and Brunei,with claiming different parts.

Australia Foreign minister Julie Bishop has said China’s creating an enviroment of tension and mistrust”. Australia has urged all parties to refrain from coercive behaviour and unilateral actions that could change the status quo.