The 1951 Convention relating to the Status of Refugees, to which Australia is a signatory, defines a refugee as:

“Any person who owing to a well founded fear of being persecuted for reasons of race, religion, nationality, membership of a particular social group or political opinion, is outside the country of his/her nationality and is unable, or owing to such fear, is unwilling to avail himself/herself of the protection of that country.”

An asylum seeker is a person who has sought protection as a refugee, but whose claim for refugee status has not yet been assessed. Every refugee has at some point been an asylum seeker.

Asylum seekers who arrive in Australia by boat are neither engaging in illegal activity, nor are they immigrants. Both international and Australian law permit unauthorised entry into Australia for the purposes of seeking asylum. Asylum seekers do not break any Australian laws simply by arriving on boats or without authorisation.

The Australian Government indicated that in the 2013-14 financial year, it intends to provide 13,750 places in the Humanitarian Program.

The governments policy towards asylum seekers and border protection is completely wrong and denies those who need protection.

The offshore processing is costing Australian taxpayers 10 times more than letting asylum seekers live in the community while their refugee claims are processed, the Commission’s report reveals. At the same time not providing appropriate protection to asylum seekers.

Offshore processing and arbitrary detention has received widespread criticism from the UNHCR, Amnesty International and the Commonwealth Ombudsman. Both the ALP and the Coalition have failed asylum seekers. 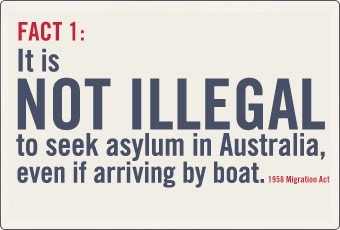 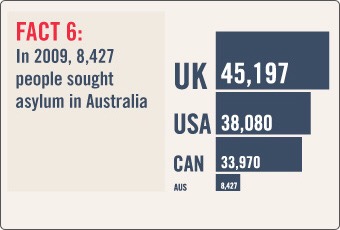