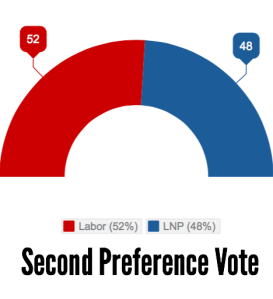 This weeks Essential Media Poll has the 2 Party preferred vote for the ALP at 52% and the LNP 48%. This is no change from the previous week but it is a a negative -5.5% swing away from the LNP and a 5.5% swing towards Labor since the last election.

Responds to the poll were also asked if the approved or disapproved of the way the Right-Wing Liberal-National Coalition government was handling the Federal budget. Only one third (34%) of respondents approve of the way the he Right-Wing Liberal-National Coalition government is handling the federal budget – a small bump of up 4% compared to last year’s budget.

The results of the from the poll also showed that those on higher incomes such as  more than $1,600+ per week were more likely to approve (42% approve/28% disapprove). The poll also highlighted 40% think the economy is heading in the wrong direction under the Liberal-National Coalition Government compared to only 35% of respondents thinking that Australia’s economy is heading in the right direction.